Before starting, here’s some additional information related to my analysis “Euclid’s Choice….” The story broke the day after I posted my analysis. The European Space Agency’s Director General, Josef Aschbacher, basically acknowledged ESA might have to use alternatives to Ariane 6 since Soyuz is unavailable. While he leaned toward using SpaceX as an alternative, he also seemed interested in Japan’s and India’s space launch offerings. While his potential alternatives mirror the ones noted in my analysis, the similarity isn’t due to me being a genius or soothsayer. Rather, current launch options are just that limited.

Also, Orbify posted another of my articles–this time about using infrared for determining a crop’s health.

Generally, in the smallsat space operations realm, Earth observation/remote sensing satellites (EO/RS) were the flavor of the decade. Planet, Spire, Iceye, Capella, GHGSat, and many, many others came to prominence with their smallsats and the products they created. Then, broadband communications smallsats came to the fore. Much larger than cubesats, the smallsats from SpaceX and OneWeb were still significantly smaller than those of Iridium or the much larger GEO satellite operators (although not for much longer if Starlink’s next generation starts deploying). More recently there have been noises of an operator in another potential market category. Will the revenues from that category prove elusive?

There’ve been a few updates about Xona Space Systems, with the most recent news concerning the company’s latest financing round and Lockheed Martin’s contributions during that round to Xona. The company already deployed a pathfinder satellite, Huginn, earlier in 2022, with plans to deploy another, Muninn, sometime in 2023. Those conversant with Norse mythology will recognize those names coming from Odin’s ravens, associated with thought and memory. Xona manufactured its pathfinders in-house, intending to deploy a constellation of 276 Pulsar cubesats into low Earth orbit (LEO) after testing its pathfinder satellites.

Unlike the latest trend of joining other startups in deploying yet more Earth observation (EO) satellites, Xona is stepping into a realm that is, like EO was, dominated by government interests and operators. The company aims to have its satellites provide extremely accurate positioning, navigation, and timing (PNT) services. Xona’s planned constellation would number more than the 147 current operational government PNT satellites combined. Also, unlike most of those EO startups, Xona already has a satellite in orbit.

PNT satellite constellations such as GPS, GLONASS, Galileo, NAVIC, BEIDOU, and QZSS are traditionally funded and operated by government/military organizations. While many of those constellations were initiated for military purposes, their positive impact on commercial products and services cannot be understated. 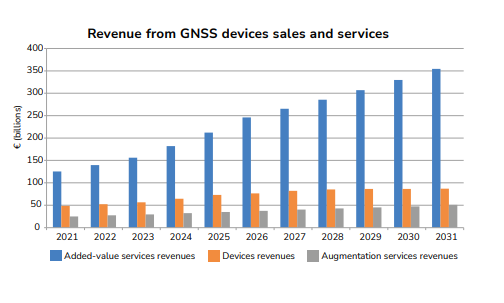 Those positive impacts will increase, according to the European Union’s latest market report. The EU report forecasts that by 2031, revenues from devices sales and services will be ~€500 billion, greater than the overall global space economy numbers some organizations reported for last year. Note that the portion of greatest growth, “added-value services revenues,” includes data provided to location-based smartphone applications over cellular networks, the revenues from smartphone app sales, etc. It’s that part of the growth forecast that some groups use to justify the inclusion of Uber or AirBnB in global space economy accounting, making the global space economy seem larger than it truly is.

Important to Xona’s business case is the fact that the most impactful service from GPS is provided to users worldwide for free. It is difficult to compete with free. Making things more challenging for competitors, GPS is reliable (the U.S. and other militaries rely on it–the finance sector, too), and, thanks to increasing smartphone/smartdevice usage, ubiquitously in use. The beauty of the system is it just works. People don’t need to understand how GPS works, nor do they need to do anything special to use it–aside from buying a smartphone and installing an app. Some smartphone chipsets also support signals from BeiDou, Galileo, and GLONASS satellites.

The challenge presented by not just one but several constellations providing a free, reliable, ubiquitous, and simple service makes Xona’s plans for competing seem foolish. However, Xona isn’t the only commercial company in the PNT field. Another, Satelles, has operated an alternative/backup to GPS since the IridiumNEXT constellation finished deploying in 2019.

The company advertises that because Iridium’s satellites are lower in orbit (an altitude of ~780 kilometers) than GPS satellites and that their signal output is more robust, GPS receivers on Earth get a much stronger signal (Satelles states 1000X stronger) than from a regular GPS satellite. It’s strong enough to be received inside buildings. The way it operates makes it much less susceptible to GPS spoofing as well. The company lists the possible applications for its PNT service. The top five on that list (out of 18 suggested applications):

Satelles appears to be emphasizing the “timing” part of PNT on the list, noting in its literature that the accurate timing GPS provides is important to wireless cellular networks.

Xona’s Applications (and the Markets They Address)

Xona highlights similar LEO constellation strengths: it provides a strong signal, has anti-spoofing technology, and is extremely accurate (<10 cm or 4 inches), more so than GPS. However, the company is going in a different direction from Satelles. Its primary stated application relies on the accuracy of the signal transmitted from its constellation. Instead, Xona will focus on providing services to technologies that may be on the verge of wider adoption: autonomous vehicles, drones/aircraft, and augmented reality. Those applications are theoretically better served with more accurate location data that can be received reliably in urban canyons, indoors, etc.

That focus on providing extremely accurate geolocation data is positive, as Xona’s management and company can focus on one thing. But it may also be a weak point for Xona. Instead of the typical hyperbole from most startups with unrealistic goals hawking immature fantasy technologies, Xona relies on trends it sees on the edge of technology to justify its business. They aren’t close to mature but aren’t quite the science fiction fantasy they once were.

Autonomous vehicles, for example, are still experiments in progress. True, “smart” aspects are being sold as part of current vehicle offerings, such as adaptive cruise control and safety packages. But the consensus appears that it may take a few more decades for true autonomy to be achieved. The state of technology and the use of drones and augmented reality appear to be in similar stages of progress. And, of course, those companies developing each technology have their proprietary take on what the future should look like. Nevertheless, Xona’s business plan anticipates those technologies maturing, likely resulting in widespread use (and benefit Xona).

At the same time, however, it would make sense for a company like Xona to be on the ground floor of the next potential future technologies. The companies building those technologies would likely accept whatever edge a more accurate positioning signal gives their products and services. It may be that governments will require the incorporation of services such as those from Xona for an autonomous vehicle or drone to be certified for use. It would be interesting if services similar to Xona’s developed that would be useful for tracking spacecraft in Earth’s orbit. There’s also the data point that the EU forecasts at least one of Xona’s applications, drones, as part of a major category (Aviation and Drones). The share and growth would be yet another reason for Xona to maintain focus on its applications.

The satellites Xona appears to be planning to use for its constellations are cubesats. That form factor will allow the company to deploy its nearly 300 satellites for very little money, especially when compared with GPS satellites. It may well be that the entire Xona constellation could be manufactured and launched for less than what a single GPS III satellite costs (~$600 million). Especially if Xona uses SpaceX’s Smallsat Rideshare service to get its satellites in orbit. If the constellation works as accurately and reliably as Xona believes it will, the constellation would be a bargain.

How will Xona make money when its predecessors provide a “good enough” service for free? That part doesn’t appear to be publicly articulated by Xona. There are apparent military applications that could use Xona’s accuracy. Surely, a military paying ~$600 million for a single GPS satellite would be willing to pay to ensure it has access to another system as a backup. More likely, it may be through partnerships with companies such as Canada’s Hexagon/Novatel.

Novatel and Xona signed a memorandum of understanding to collaborate on developing PNT technology for Xona’s service. Novatel manufactures global navigation satellite system (GNSS) hardware such as antennas, receivers, and inertial measurement units (IMUs) and has integrated these systems with automobiles. In addition, Novatel has worked with GPS since the system was deployed and pioneered the Wide Area Augmentation System (WAAS) to GPS for the U.S. Federal Aviation Administration. It also has an autonomy division. The partnership might pay off for Xona as it grows into an accurate geolocation provider and for Novatel as it pursues its autonomy plans.

Whether Satelles’ and Xona’s first steps into commercial PNT services signify that others will follow remains to be seen. But, based on the growing subsegments in the Earth observation and communications sector, we may likely see PNT as a desirable opportunity for others to pursue.

1 thought on “Positioning, Navigation, Timing: a Segment Ready for Commercialization?”