Based on the editorials, press releases, and Twitter slap-fights over space boundary definitions, the privileges of the rich riding into space, the even apparently worse sin of offering the rich rides into space, etc., it’s easy to miss the significance of Virgin Galactic’s SpaceShipTwo rocketplane or Blue Origin’s New Shepard achievements. Even Virgin Galactic’s investors are confused about the company’s development path for a business beyond a super slick version of the Montgolfier brothers’ balloon rides that were offered centuries ago.

To be clear, the accomplishments from both companies are unambiguous: they’ve launched humans to space using rocket systems. This is not an easy thing to do. There are nations with dedicated programs struggling to successfully launch just small rockets and not succeeding. Their development programs have existed longer than either Blue Origin or Virgin Galactic. The accomplishments of these two companies put them in limited company and they should be proud. Only SpaceX and the governments of the United States, Russia, and China have managed to achieve that basic requirement and more. Boeing may eventually join them.

More importantly, the humans on board those companies’ systems came back in one piece. Their accomplishments are not “Commercial Crew”-level and don’t quite equal the first NASA suborbital Mercury missions so long ago. Still, the fact that both have return systems not requiring a helicopter and an ocean to retrieve passengers safely could be seen as a sign of progress. The other fact that these are private companies achieving these successes doesn’t appear to be lost on anybody.

Make no mistake: Virgin Galactic’s and Blue Origin’s offerings are modern versions of what the Montgolfier brothers offered to Parisians over 200 years ago. Both businesses are very much high-priced and “experiential-focused,” the modern-day equivalent of the Montgolfier brothers’ hot-air balloon rides. Paris’ “wealthy and fashionable set…” paid high prices to ride up into the sky. That certainly describes the majority of customers both companies are courting today.

These companies’ business models appear, then, to follow ancient practices. There is nothing wrong with this, but their market may be limited. However, this history partially answers one pertinent question about Virgin Galactic’s and Blue Origin’s activities: Are they the businesses of the future? Since hot air balloon rides tend to fall into a novelty service, perhaps not. Of course, this answer is based on history and on less expensive technology. Can these companies extrapolate a commercial travel business from their activity and technology today?

That’s the question of these companies’ activities, isn’t it? Are what they are doing right now something that will be serious business down the road, instead of a potential Disney ride (although, to be fair, Disney is serious business, too)? The remaining discussion will focus on Virgin Galactic. A look at Blue Origin’s offering will come at a later date.

Focusing on Virgin Galactic, there are interests pushing the notion that the company’s fair ride activities today are hints of a world-changing transportation business tomorrow. Can this be true? Is SpaceShipTwo’s system of launching representative of how the company would quickly fly people from New York to Dubai in a few decades? Based solely on the system Virgin Galactic is using today, no. But this should not be a surprising result for a company known for its expertise in offering services and experiences and not manufacturing. Take a look at what’s required to “launch” SpaceShipTwo: 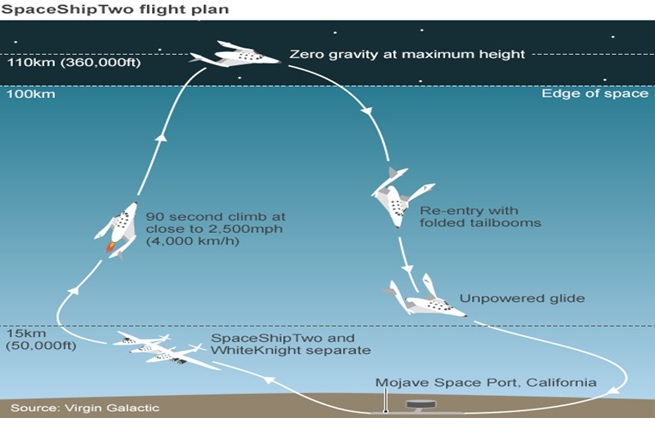 Launching SpaceShipTwo requires a very expensive airplane. That airplane, WhiteKnightTwo, is designed to fly higher than most aircraft. SpaceShipTwo and WhiteKnightTwo each have two pilots. For every launch, four pilots and two vehicles are involved. Add six passengers and the math shows that pilots make up nearly half of the initial human payload.

In the current system, WhiteKnightTwo also takes a majority of the two-hour experience to get to launch altitude (at least over an hour). For those remembering claims of future point-to-point rides on Virgin Galactic rocketplanes, this fact may not jibe with those claims. At altitude, SpaceShipTwo drops from the airplane and launches to space (which is not 110 km anymore for Virgin Galactic, but ~90 km). The rocket motor is specifically designed to get SpaceShipTwo to that altitude. I believe if Virgin could eke more performance out of the motor to reach a higher altitude, it would do so (if only for marketing purposes).

Result: SpaceShipTwo’s current spaceflight plan is fine for the wealthy and fashionable set looking for a thrill ride. But it is a Rube Goldberg approach to suborbital commercial spaceflight. Virgin Galactic appears to have been so entranced by Burt Rutan’s initial design, that it fell into the trap of not questioning if there was a better way to do achieve the company’s goal. Was there a way to use what Rutan accomplished AND future-proof the system to make it more amenable to conducting a fast-turnaround suborbital transportation business? Instead, the current system adds complexity, which is not desirable in a money-making endeavor. Sure, space is hard, but why make it harder?

For example, there are at least two challenges with adopting Virgin Galactic’s current approach using WhiteKnightTwo for suborbital point-to-point human spaceflight. First, the design would need to be significantly revised. It is designed for SpaceShipTwo only (with a ~3000-4000 kg margin). Longer trips beyond the atmosphere require a bigger rocketplane than SpaceShipTwo, implying more mass, longer body, etc., possibly exceeding WhiteKnightTwo’s capabilities.

The second challenge (alluded to earlier) is the time required for WhiteKnightTwo to get to launch altitude. If future Virgin Galactic point-to-point services use a similar system, it won’t be as quick as advertised. So that hypersonic flight from LA to Hong Kong in about 90 minutes becomes nearly a third longer in duration. However, three hours would still be much faster than what airlines offer between those two points today.

Slower than the Blue Origin Tortoise (and still more to do)

These challenges aren’t insurmountable. But they require resources and time. Virgin Galactic does have intelligent people who have thought about this challenge and others. It may be the point-to-point Virgin Galactic fleet won’t use any airplane for launching its rocketplanes in the future. But that means even more significant design changes to whatever comes after SpaceShipTwo, followed by re-tooling and lots of testing. Keep in mind that Virgin Galactic has spent nearly 20 years to get to this point. While it’s probably learned a lot to develop and launch SpaceShipTwo, it will be learning more while implementing whatever plan it is committed to.

This history is also why the arguments for future lower ticket prices for those point-to-point flights make no sense to me. These arguments presuppose that Virgin Galactic is moving from development to operations. That makes sense–only if Virgin Galactic is satisfied with providing high-priced fair rides. Each ride, based on a six-passenger load, would generate $1.5 million for Virgin Galactic. That cost includes a system that requires two pilots for SpaceShipTwo and two pilots for WhiteKnightTwo. As with the Montgolfier brothers’ service, there may be limited and eventually dwindling demand for Virgin Galactic’s suborbital fair ride offering.

But if it’s moving towards point-to-point, then Virgin Galactic must spend more on developing larger rocketplanes and aircraft. In addition, it would need to develop a global system to support it–after all, those hybrid rocket motors aren’t available everywhere. That development requires more investment which will hopefully provide a return. But that return only makes sense when charging higher prices for suborbital spaceflight.

In other words, both Virgin Galactic’s current business model and suborbital spaceflight system aren’t the future. The model continues the age-old tradition of catering to the whims of the well-to-do. The system is a test demonstrator for a very specific suborbital flight profile that doesn’t appear to be amenable to the point-to-point future that investors keep espousing. Does this mean that Virgin Galactic is at a dead-end? No–the company could theoretically already be moving towards a very different system. But based on the company’s history, that system will be a while in coming. And it won’t be cheaper using current manufacturing processes.

I must admit, though, that SpaceShipTwo’s flight does provide a high-profile “WOW!” factor to the space industry. It’s up to investors to decide whether that’s valuable.

2 thoughts on “Focus On: Virgin Galactic’s Wild Ride–Future of Spaceflight or Fair Ride?”