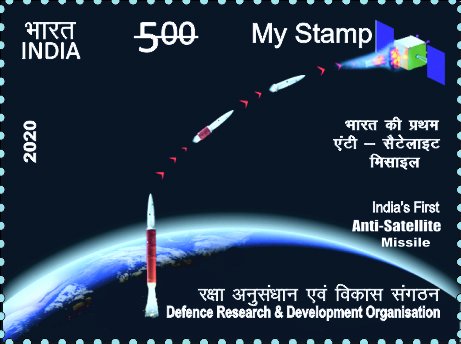 A Stamp to Remember ASAT By…

Remember when India launched an anti-satellite missile at the beginning of 2019 and successfully destroyed a target satellite? It was a big deal for India, but the test also caused international outcries of irresponsibility and war-mongering. Despite those types of condemnations, India’s pursuit of ASAT capability is natural, considering a historical and current adversary, China, has the same ability, possibly threatening India’s space assets. And India announced the test (versus how China’s test was revealed through U.S. military announcements).

India’s capability to shoot down someone else’s satellites, then, could be seen as an ability to be proud of. And the nation’s release of a stamp commemorating the event confirms that. Yes, a postage stamp depicted the missile in motion, eventually impacting the target satellite. One nation’s orbital debris is another nation’s deterrence capability.

Imagine posting an image of the U.S. Burnt Frost test on a stamp. That’d be kind of cool. But that’s what patches are for.

In the meantime, India’s government appears to be serious about fostering commercial Indian businesses to become commercial Indian space businesses. An article in The Economic Times lists a few of the changes India is implementing to gain private sector interest in what has long been a government domain in that country.

While India’s space efforts have been humble compared to U.S. and Chinese space activity, it’s peppered those efforts with significant milestones: a Mars satellite; lunar exploration; completion of an indigenous positioning, navigation, and timing constellation. India’s activities have also experienced setbacks. But those setbacks are why its government would like insurance companies to get involved as the private sector becomes more involved in space. It knows there are risks, and that it must soften those risks somehow.

These are the first steps in India’s attempts to get the private sector in space. Making policies and regulations that are more conducive to private sector involvement is a start, but as we’ve seen in the United States, more needs to be done. Other nations have struggled with the concept of investor capital backing entrepreneurs and startups taking risks, not just in space, but in all types of industry. Europeans, particularly the Germans and French, have struggled with startups and risk for some time, as noted in “India, the Pandemic, European Entrepreneurs:”

A common lament from these entrepreneurs is that risk-taking in Europe, especially risk-taking with capital, is discouraged. Those who do take risks, and fail, are punished–almost becoming non-persons. They can’t bounce back. Imagine if risk-aversion were the cultural guidepost in Silicon Valley. The Angel investor scene in Silicon Valley encourages risk-taking, and the European entrepreneurs I spoke with understand that. While many elect to stay in Europe, some move. Some have moved operations and manufacturing from Europe to other nations with more opportunities and risk-acceptance–such as India.

However, India has a substantial entrepreneurial sector, as demonstrated by the nation’s embrace of the technology sector. Its investors may more readily accept investment risk than the Europeans.

Its own “legacy space interests will also impact India’s success in getting the private sector involved in Indian space efforts.” In the U.S, we see just how much politicians dance to public spending on private companies for large “rockets to nowhere” national projects. While politics shouldn’t ever be involved in building rockets and scientific instruments, the examples exist in the U.S. even now.

India Has a Space History…and Credibility

Does India have anything that deliberately dysfunctional? Are there companies serving the Indian Space Research Organisation (ISRO) and getting paid well who will somehow get politicians to make things much harder for the Indian Space Industry’s private sector? Does the ISRO itself have people who believe the Indian government should be the only one conducting space activities for the country? That India’s low launch rate is acceptable even as other nations are literally rocketing ahead in launches annually?

If this works, China should be concerned. China’s launch companies, for example, have created small satellite launch vehicles, such as the CZ-11. However, the problem for China’s companies is that no nation or company outside of China’s influence sphere will ever trust them. They have a credibility problem:

The low ratio of foreign customers for China’s satellite manufacturers might be because of a credibility problem they have with the rest of the world. The country’s heavy-handed government intrusions in its tech sector indicate that it hasn’t left the space sector alone. As concerning is the nation’s history in failing to protect foreign property rights.

India doesn’t have that credibility problem. Even more concerning for China, India’s space industry has a great history of supporting foreign customers. For the past decade or so, the nation’s Polar Satellite Launch Vehicle (PSLV) nearly always launched with foreign rideshare small satellites. Even U.S. smallsat operators have had their satellites deployed from India’s PSLV.

With that trust and history, if India’s private sector can successfully build launch vehicles and obtain satellites for less than even Chinese offerings–then it could dominate small satellite launch in that region.