It’s been nearly a year since SpaceX announced its Smallsat Rideshare program. Based on recent news–and a full 2020 manifest for the program–it appears to be doing well.

At the time SpaceX introduced the SmallSat Rideshare program, the company initially announced that for as “little” as $2.5 million it would launch into sun-synchronous orbit (SSO) a payload with a mass as high as 150 kg. Basically, a person or company could launch a single kilogram satellite for ~$16,700. A single rideshare launch would be offered each year from 2020/2021-2023. These launches would not be dependent on a single primary satellite, but would instead be launching on a schedule.

Less than a month after that announcement, SpaceX then announced a change to its Smallsat Rideshare program. Instead of $2.5 million, the cost was lowered to $1 million. And the mass the company launched for that price was increased from 150 to 200 kilograms. SpaceX had reduced the price of launching one kilogram to space by more than two-thirds of its original announcement–it was (and continues to be) $5,000 per kilogram. That price is less per kilogram than it costs a SpaceX customer to launch 5,500 kg to geosynchronous transfer orbit for $62 million (which is ~$11,300/kg as of this writing).

The company increased the number of annual rideshare launches available, too. Instead of once a year, there would be three per year (although, based on this article, it looks like SpaceX is increasing availability). These changes, all within one month of the initial announcement, suggest that:

There are also at least two kinds of Rideshare configurations–one which adds rideshare adapters on top of a Starlink satellite stack, and one which launches with a deployer dedicated to ridesharing satellites. The latter appears to be similar in configuration to RUAG’s OneWeb satellite deployer, except SpaceX’s deployer can handle satellites of various sizes. The former looks like a grid-platform (user guide image below) on which one or two satellites can be mounted and then set on top of the Starlink stack. 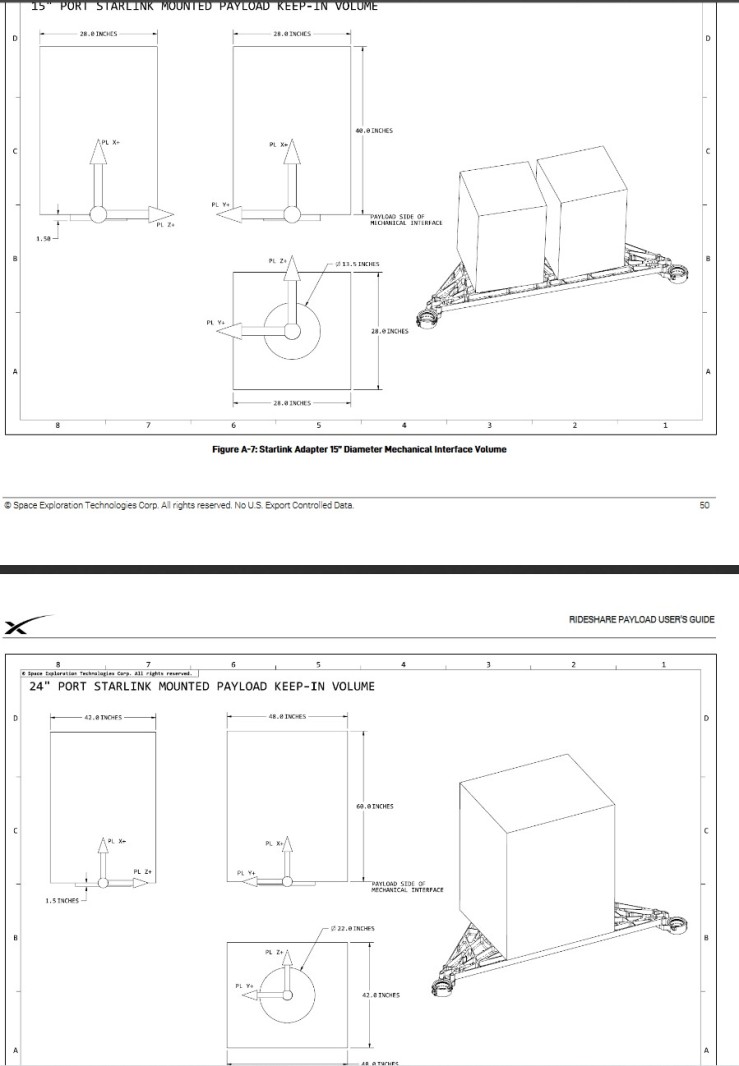 It doesn’t appear that a Starlink Rideshare will be able to deploy as many satellites as a dedicated SpaceX Rideshare launch.

The rideshare program is “incredibly competitive,” Safyan told SpaceNews. He called it “one of the more significant programs for the smallsat industry especially because of the pricing, the reliability and the number of orbits.”–Spacenews.com, May 18, 2020

For demonstration purposes, this part of the analysis will only use a sampling of operational smallsat launchers, with the understanding there are others available, such as the PSLV, SS-520, CZ-11, etc. Also note that while the analysis includes a Chinese launch vehicle family, the Kuaizhou, it’s only to provide data for pricing comparison. No foreign smallsat operators are likely to trust any Chinese smallsat company, even if it’s a true commercial company–at least in the near future. This isn’t because the Chinese company is offering an inferior product, but rather because the government and laws it must comply with are antithetical to free world values. 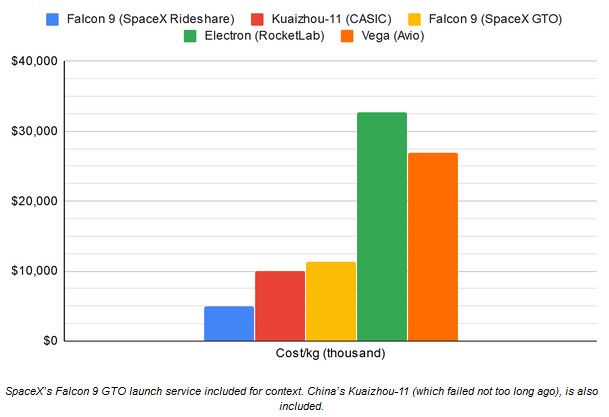 That companies like Planet and BlackSky are quickly taking advantage of SpaceX’s program is no surprise. Safyan mentioned the most obvious program advantage: pricing. What his company is paying SpaceX per kilogram is less than one-quarter of what it pays the competition for similar services. Using Avio’s Vega as the example–Arianespace has publicly stated it’s launching a maximum of 1,500 kg to SSO for nearly $40 million. This means Europe’s Vega would cost Planet $3 million to deploy a single Planet satellite–twice as much as it cost Planet to deploy three satellites with SpaceX. Rocket Lab’s pricing is less impressive. It would have cost Planet essentially three times as much to deploy a single satellite with Rocket Lab, instead of three satellites with SpaceX.

Then there’s reliability, which encompasses how often a launch vehicle launches annually and impacts of failure on that launch cadence. Aside from the Falcon 9, the average annual launch cadence of these other launch vehicles (or launch vehicle families) tends towards the low single digits. The three Rideshare launches SpaceX offers each year pretty much matches or even exceeds the sampling of smallsat launchers’ annual averages in launch cadence for the past three years. This gives smallsat operators another, potentially more responsive, launch option. This has turned out to be fortuitous considering Vega and Electron have recently experienced failures, which impacted launch manifests and their annual launch cadence.

The surprise (for me) is the last reason Safyan brings forward for going with SpaceX: the number of orbits available in SpaceX’s program. Typically, a customer in a rideshare billet understands that the launch vehicle’s primary payload determines the orbit of all ridesharing satellites on that launch vehicle. This is why one of the justifications other smallsat launch providers give for contracting with a Rocket Lab or an Arianespace is that a customer’s small satellites can be inserted in an orbit tailored for the customer’s mission. This sentiment was highlighted in a TechCrunch interview with Rocket Lab’s Shane Fleming:

“At Rocket Lab smallsat customers are our number one business, and that’s what we do. We offer very dedicated, tailored service exactly where you want to go, when you want to go, and for a lot of customers that’s really important. And we also offer a lot more orbital inclinations; not everyone wants to go to SSO; there are orbits that are more unique than that where customers need to go in and we fulfill that. So whether they drop their price or not, it’s really a service-backed industry and that’s what we’re supporting.”

This might have held true even as late as last year. But SpaceX is launching so often–if only to populate its Starlink broadband constellation–that there are more orbits available annually to its Rideshare customers. The company’s annual launch average for the last three years was around 16, and it looks like SpaceX will boost its average this year (it has launched the Falcon 9 ten times in 2020 already).

There are also more types of orbits available than SSO, as Starlink requires satellites to orbit the Earth in a few different altitudes and inclinations. This variety is probably what Safyan is referring to. And he understands orbital compromise, as his company deployed its cubesats from the International Space Station (ISS). A 51.6-degree inclination, which is where the ISS orbits the Earth, is not an ideal orbit for Planet’s Earth observation satellites. Or for many types of Earth observation satellites.