Reading this post after writing it, I believe some people will be peeved. That’s not the intent. What this analysis does is point where the U.S. Space Force (SF) is TODAY regarding its resources and missions. The SF has inherited the parts of the Air Force that the USAF needed but didn’t really want (or understand). The SF’s future depends on how unwilling it is to rock a boat or two. Checklist discipline is fine for conducting day-to-day ops, but not for the nation’s future space capability.

In mid-April, there were several articles about General John Raymond’s released comments and concerns highlighting Russia’s unfriendly space activities. As commander of U.S. Space Command and the U.S. Space Force’s (SF) chief of operations, Raymond talked about Russia’s latest anti-satellite (ASAT) test (which occurred on the same day as Raymond’s comments) as well as that nation’s roaming satellites (which tend to get a little too close to satellites not owned by the Russian military).

And that was it.

There was no talk of how those Russian “inspector” satellites were evaded or deactivated by American technology. No highlighting of how U.S. satellites were ready to move out of the way, or of a system that was ready to defend those satellites. And it’s because, despite all the plans and talk about the SF, it isn’t ready to do so. To answer why the SF isn’t ready requires looking a little closer at the operations the SF runs (which were inherited from the USAF). It’s apparent the service is hobbled from the start because 1) how the USAF envisioned and implemented “space operations,” and 2) intelligence’s version of space operations.

Before continuing on, this is not an assessment of Raymond but an examination of what the SF brings to the table of space warfare currently. I hope the SF has the endurance to move beyond its history.

Parsing the missions/constellations out below might reveal a surprising aspect of a military organization with the word “force” in its name. 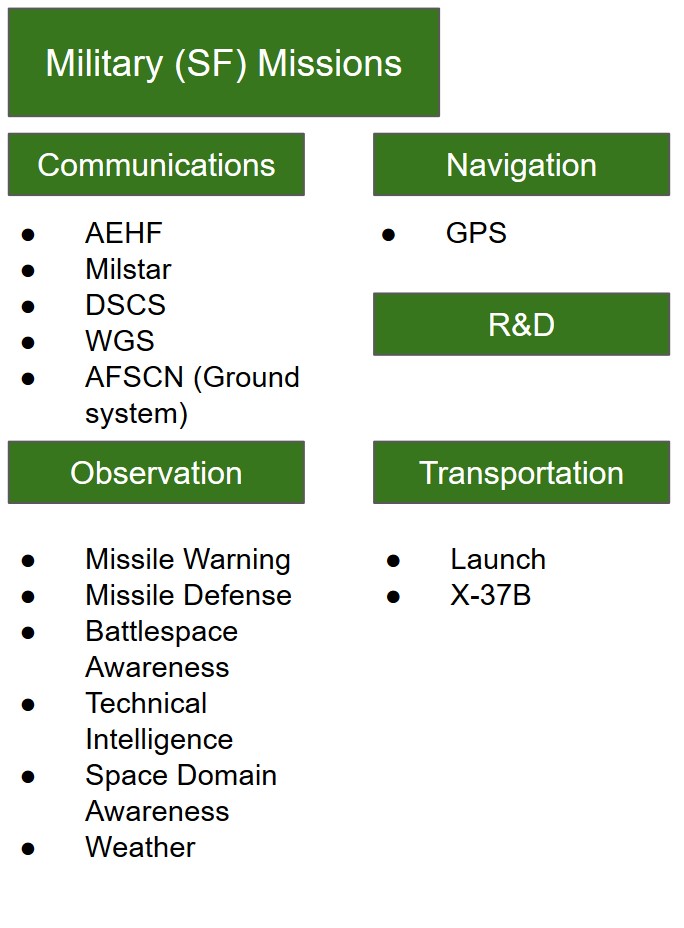 Nearly three-quarters of today’s Space Force assets/missions are dedicated to infrastructure activities (four of the six observation missions are accomplished with the SBIRS/DSP constellation). The high percentage of infrastructure activities implies that the majority of personnel in today’s Space Force are focused on making sure infrastructure is operational, that communications lines aren’t crossed, that launches will be monitored and that the ground system schedule has no overlaps or gaps. While these are important functions, they are not what an average person perhaps thinks of when the topic of Space Force comes up in conversation.

More aligned with that Space Force image, though, might be the X-37B missions, which, as near as I can tell, are just missions to deploy other spacecraft and perhaps bring them back. But no matter its “freight-hauler mission,” winged spacecraft tend to be associated with fictional space dramas. The X-37B looks like something out of Buck Rogers.

Noteworthy are the missions that aren’t infrastructure-related–21% of the SF’s spacecraft are used for missions that produce data instead. Satellites such as those hosting Space Based Infrared (SBIRS) payloads and Defense Support Program (DSP) are part of that small percentage of operations, but these missions might also be more in line with what a civilian expects to see from the SF.

The operators of these infrared satellites do more than ensure their satellites are functioning well–their mission encompasses missile warning (warning U.S. decision-makers about incoming missiles), missile defense (supplying information to missile defense types), technical intelligence (extracting information from whatever they are observing), and battlespace awareness (warning a battlefield commander about incoming missiles).

The space domain awareness missions use satellites in low and geosynchronous Earth orbit to monitor the space around the Earth for objects activities. This mission also uses sensors on the Earth’s surface aimed up to space to do the same. It might be another type of mission the average person might expect of the Space Force operator.

These SF assets are why Raymond can really only talk about Russian or Chinese ASAT testing–they don’t allow the SF to do more than watch an event, then pass that information on. It’s military service without force projection. It enhances the capabilities of other services, but on its own, it can’t even defend its space assets. It’s a service that serves other military services.

Adding Capabilities for the Future?

The lopsidedness of infrastructure-focused space missions might be why the SF is continuing attempts at the kingdom-enlarging activities the USAF started and occasionally re-engaged in: taking over space intelligence. Specifically, the National Reconnaissance Office (NRO) has been in the service’s targeting reticle for decades.

While people are debating over the merits/drawbacks of a military Space Force in charge of national intelligence acquisitions and operations, what does such a takeover do for the SF’s assets? This next part gets a little tricky because the NRO doesn’t really tell the public what it’s operating. Which entails a little sleuthing and guessing. Referencing the NRO’s history site helps with the guessing.

If the SF were to get control of the NRO’s assets, they would add more infrastructure missions. It also probably adds whatever observation capability the NRO has which means serving others by providing data.

Ultimately, the SF gaining NRO assets doesn’t change the “service as a service” equation for the Space Force. And it’s doubtful the NRO could influence SF’s inherited broken acquisitions corps, as the USAF has referenced and consulted with the NRO about best practices a few times during the past few decades. As noted in “Military Milestones, Costs, and Culture,” nothing took.

Maybe the Space Development Agency’s (SDA) plans can help? After all, it’s published grand plans for a constellation of hundreds of satellites. However, the SDA isn’t really focused on adding a force projection capability to the SF. Instead, it’s looking for ways for the different DoD and missile defense systems to work together. In some ways, the SDA’s mission is focused on developing a grandiose IT network for global system capability (infrastructure). If the SF allows the SDA to develop such a system, then the SF’s role leans more towards infrastructure maintenance and operations, rather than less.

The War of the Future, Yesterday

Based on the mission sub-sections, the space service appears to be training a majority of its force to be the modern version of telephone switchboard operators. Highly trained operators for important infrastructure helping with important missions. For the first batch of 86 Air Force Academy SF graduates and new SF hires (beginning May 1), this initial type of job billet will probably be underwhelming. Even folks who are more aware of space activity and the Space Force don’t seem to quite understand the problem with the circular idea of protecting space assets with more space assets.

But is that really the vision, a future, for the Space Force?

More importantly, does anything from the SF and NRO counter existing threats to U.S. space assets? There might be other classified systems the NRO operates that may, but that’s conjecture about a very unlikely mission for the NRO to take on. That particular organization is focused on intelligence. The SDA almost seems to be bent on building a modern Maginot Line, which is only useful if the enemy does exactly what we expect.

The SF is supposed to be about the future, but all of its inherited missions indicate it may be operating and shoring up systems that help others in winning the last war.